Why financial product scams are set to explode, and how you can protect yourself

Home » Katana Media Updates & Insights » Why financial product scams are set to explode, and how you can protect yourself

We all know the ATO doesn’t issue arrest warrants via jittery auto-dial phone messages that threaten imprisonment if we don’t “press one” to pay up. And we (hopefully) know not to give our bank account or other personal ID markers to verify an eBay purchase we haven’t made but are mysteriously “reminded” of via an unsolicited call.

But scammers are becoming far more sophisticated, and the giveaways, or ‘tells’, are getting harder to spot, even for the canniest and most experienced among us. Romano Sala Tenna of Katana Asset Management made this point in an article penned for Livewire Markets earlier this year, which quickly became one of our all-time most-read wires.

Given that the “pandemic year” of 2020 saw a surge in online and phone fraud activity – as shown below in the fresh numbers from Australian Government agency Scamwatch – perhaps it’s high time we redoubled our vigilance, and shared our experiences. 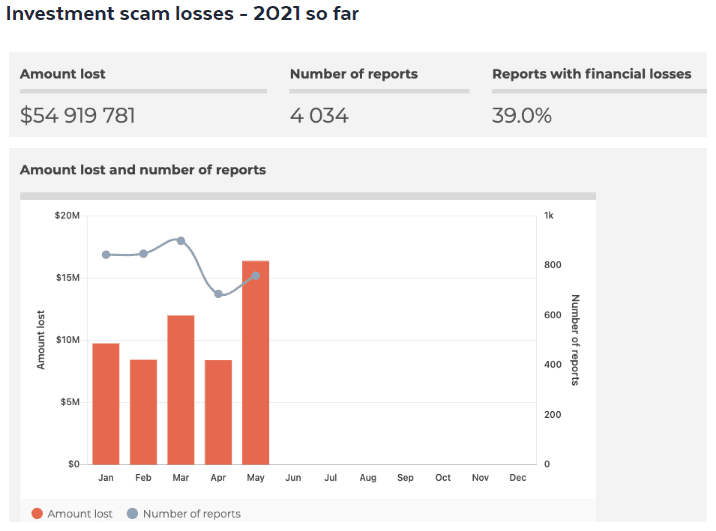 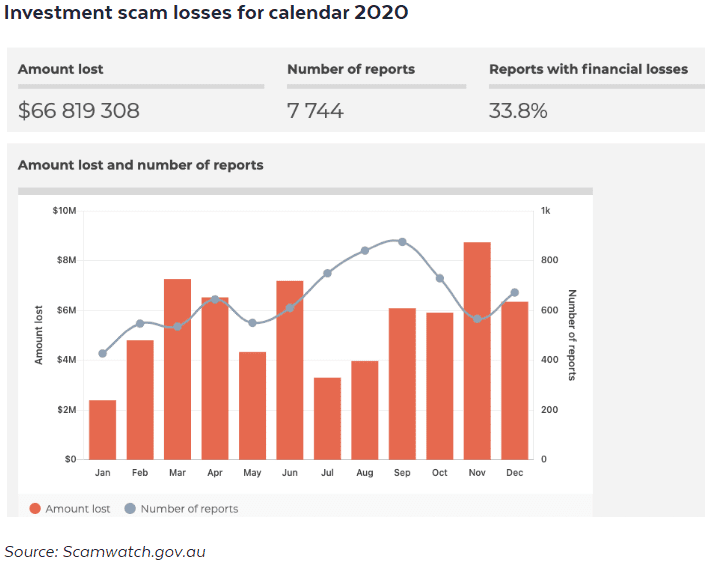 You might have a prospectus wrapped in a trusted, locally-based financial services brand letterhead document complete with a reasonable-sounding name, address and phone number.

And you might have received this after spotting an online advertisement for a corporate bond that seems just the ticket for shifting your underperforming nest egg into something more profitable, but without being crazy risky. That’s what happened to Tony Papagiannopoulos, a retired IT professional, as reported by ABC News last week.

In his case, the JP Morgan brand was used. The scammers had locally based phone numbers, legitimate-sounding verbal disclaimers and polite, well-spoken individuals explaining the features of the bogus bonds they were trying to sell him.

Australians were scammed out of more than $850 million in 2020. The biggest losses relate to financial services and products, which saw Australians fleeced of almost $330 million last year, the latest Scamwatch figures show. This includes the total 444,000 reports that individuals made to several allied agencies including Scamwatch, ReportCyber, 10 banks and other financial firms.

Around $175 million in scam losses were reported to Scamwatch alone in 2020. Of this figure, almost $66 million related to investment scams. And as the charts above show, the losses between January and the end of May this year are already running very close to the total losses from calendar 2020.

Risk-averse investors seeking a decent investment return have been caught between a rock and a hard place in the last year or more. Equities are at record highs – particularly the “Blue Sky” growth stocks and “meme” stocks. Until recent days, I’d also have mentioned cryptocurrencies – but Bitcoin has dived more than 50% since mid-April and the other major digital coins are also in the red. Which furthers the argument that yield-hungry investors currently struggle to find a relatively safe return – when local 10-year bonds remain pinned at historic lows of around 1.5% and cash rates languish.

“Because real cash yields are so low, people are feeling their hand is forced into something … if you’re a very conservative investor and you were getting 3% to 5% in the bank, you’d probably think ‘well, at least I’m still getting some sort of return,’” says Sala Tenna.
“But now when the mainline cash management account rate is about 0.4%, then you take out tax and inflation you’re getting negative-2%. So, I feel like people are being forced to look for higher returns.”

In his earlier article, Sala Tenna referred to the example of a friend who was almost scammed into investing with global investment management firm PIMCO. Other global financial brands Vanguard and HSBC were also used, as outlined recently by the Australian Financial Review.

“Those scams have just exploded now. Almost every week we’re getting reports of new scams coming through, whether it’s through Qantas, Telstra, or Westpac,” says Sala Tenna.

“They’re all tier-1 household names and every couple of weeks I find myself having new conversations with people asking, ‘is this a good product?’.”

Why are scams on the rise?

Sala Tenna believes the progression from global names to locally based brands is a major reason for the escalation in the volume of scam losses indicated in the above figures.

Technology is another key reason. “Whether it’s the technology around compiling the documentation such as PDFs, emailing them out en mass or the more complex mobile phone routing and offshore phone line diversions, the technology is now there, which means more than ever, these scammers are finding their targets,” he says.

On a related note, more people now back their own judgement rather than entrust their financial situation to a trained professional such as a financial planner or retail fund manager. This may be partly due to the high-profile misbehaviour of banks and other financial institutions, as uncovered by the banking royal commission and other inquiries. But it’s also driven by technology – more information is available online than ever and there’s a proliferation of direct investing tools and applications.

Sala Tenna believes this has been building for decades since share investing for consumers moved outside the exclusive realm of brokers into other discounted channels.
“Whether it’s direct shares, crypto, ETFs or your own mortgage, technology has enabled us to be our own financial adviser and I think we’ve become more confident in backing our own capacities,” he says.

“That can be great, but some of these scams have become quite sophisticated. And unless you’re in the industry you may not be able to spot the fake.”

Simple steps to protect savings – yours or others

Most scams can be avoided if the would-be victim follows three simple steps:

Referring to the scam alluded to in his earlier article, even Sala Tenna – who’s been in the finance industry for more than 26 years – says: “If I hadn’t stopped and thought, I probably would have believed it was a reasonable investment product.”

“We’re going to see these types of scams continue to explode over the coming months and years and I believe we really need a stronger regulatory response along with more education.”