I have read countless books on investing, met an enormous number of financial experts and fund managers, and made pretty much every investing mistake possible!

If I could distil my learnings into one statement, it would be this: the short term is unknowable, but the long term is inevitable.

Let me share my three all-time favourite tables from 30 years of investing.

The long term is inevitable

Firstly, the stock market has good years and bad, but over the long term there is only one trend and it is up. Despite this being obvious, I continue to be astounded at how investors behave during ‘bad’ years.

We are now into our 146th year on Australian stock exchanges (under various names). That enormous amount of data provides the clearest guide to anyone willing to learn. During this period, the market (dividends plus share prices) has risen 117 years and declined 29 years (returns used in this article are nominal, not real adjusted for inflation). So 80.1% of the time, the market rises. One in five years on average, the market declines. 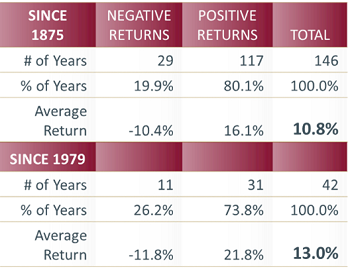 Since Australia has become more sophisticated and introduced the Accumulation Index in 1979, the data points to an even stronger outcome. Over the 42 years since 1979, the market has risen by an average of 13.0% per annum. And this is despite some seriously scary episodes, including the 1987 stockmarket crash, the 1997 Asian financial crisis, the GFC and the fastest crash on record, Covid-19.

If there is a better table than this, send it to me …

To better understand how the market behaves over different time frames, we can break the data into rolling periods. For example, a rolling five-year period, is the average return over every five-year period since 1875.

What this table demonstrates is extraordinary. 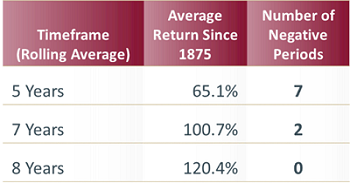 If you were to invest your money in the ASX (index), turn off your screen, go away and comeback in five years’ time, then on average you would have a 65.1% return, and there would have been only seven occasions out of the 142 rolling five-year periods where you would have a negative return.

If you were to invest your money in the ASX (index), turn off your screen, go away and comeback in seven years’ time, then on average you would have a 100.7% return, and there would have been only two occasions where you would have a negative return.

But even more remarkably, if you were to invest your money in the ASX (index), turn off your screen, go away and comeback in eight years’ time, then on average you would have a 120.4% return, and there would have been NO occasions on record where the dividends and capital growth would have been negative.

There is only one long-term trend, and it is up.

But of course, in the short term – from year to year – markets are volatile.

We’ve all seen this distribution curve below, but I suspect many investors have failed to grasp the most important aspect. 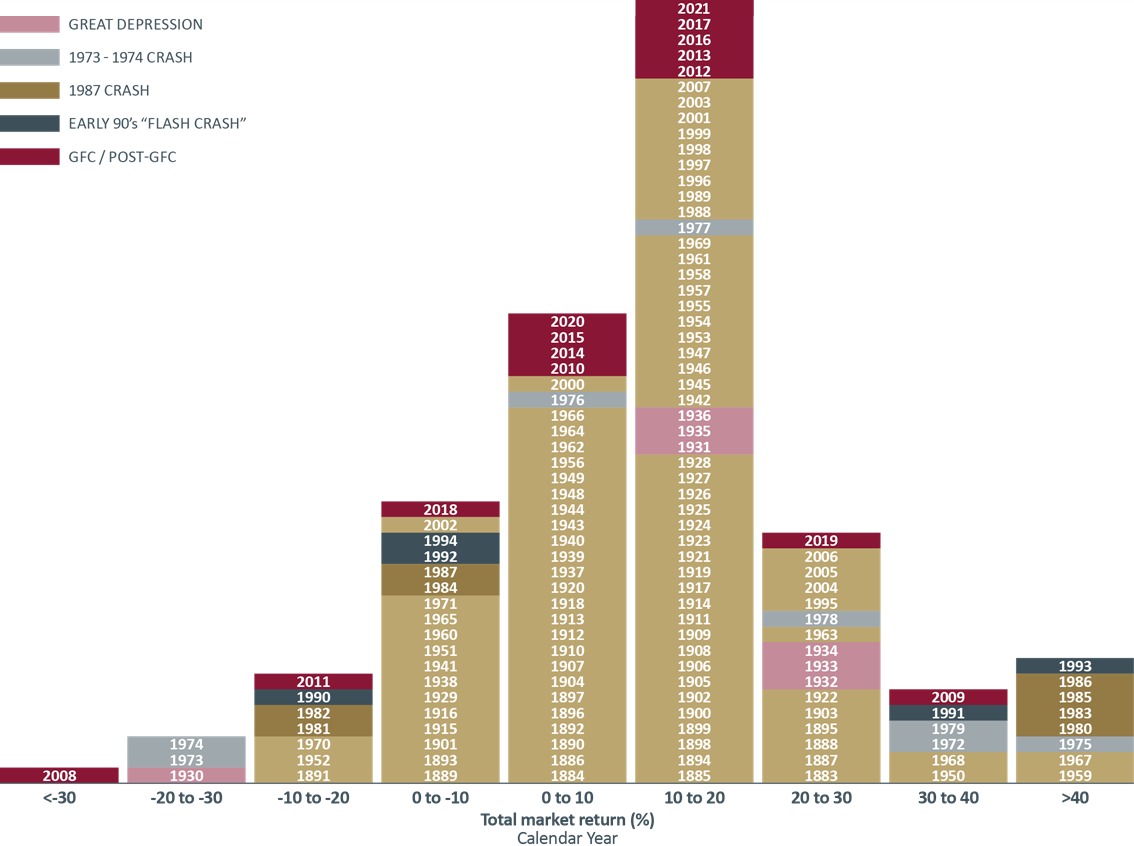 Crashes are inevitable. Be ready and don’t panic at the bottom. In fact, the best time to panic is at the top.

Know thyself. If you are prone to doing the wrong thing at the wrong time, stay out of the stock market. Or work with a trusted financial adviser who can coach you through such periods.

If the short term is unknowable and the long term inevitable, an investor really does need to focus on the long term.

If through age or financial circumstance an investor does not have the luxury of a long-term horizon, then they should understand the extra risk that they are taking on. Remember in the stock market, volatility really is the price you pay for a seat at the table. There will be another crash. Guaranteed.

If your time horizon is not beyond the next crash, or you panic and do the wrong thing at the wrong time, then discretion may be the better part of valour.