The Oil Price is Biting

Most of the current commentary in the oil market is focussing on the supply increases coming out of Saudi Arabia and the apparent ‘breakdown’ of OPEC. However, whilst the spotlight remains firmly on the Middle East, an interesting thing is happening in other parts of the world: oil production is tangibly declining. We have been watching the US for 2 years, and we are finally starting to see the long awaited decline in high cost shale production. Last month, production finally dipped below 9mboe per day and in fact dropped 100t boe per day in one week alone. Whilst it may temporarily bounce from the current level of 8.82mboe per day, the trend has finally turned from the middle of 2015 when production peaked at around 9.61mboe per day. 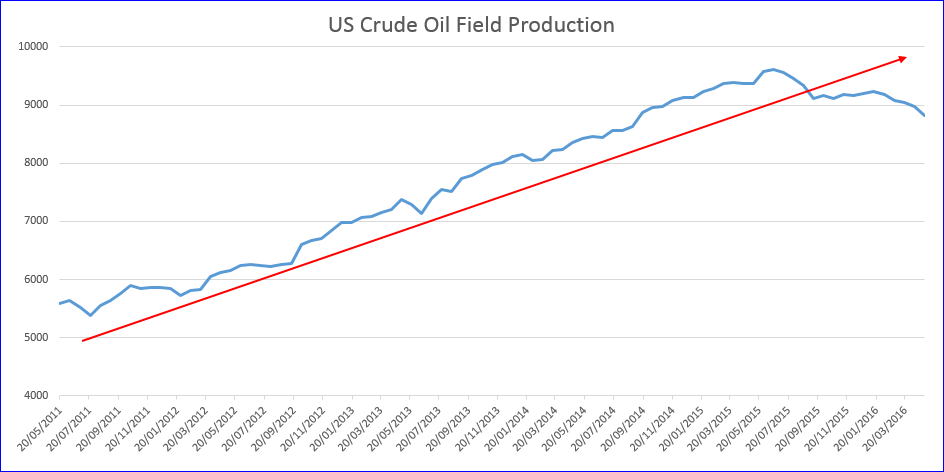 This change has taken longer than most analysts forecast, but it is nonetheless a substantial decline in production and is of global significance. Outside of OPEC, production has also declined in the past 3 months having increased for the prior 33 months consecutively. For example, we have witnessed production declines in Brazil, Mexico, Colombia, China, Azerbaijan and elsewhere (Citi research, 4th May).In short, if not for the actions of Saudi Arabia and its cohorts, we would already be staring at a market spiralling towards deficit.

So what is Saudi Arabia and OPEC playing at? We’ve put our thoughts together in this short video, which you can watch on the following link: