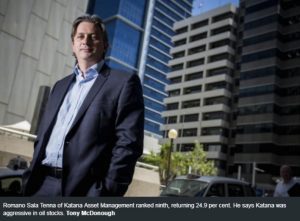 What you didn’t own mattered just as much as what you did own, if you wanted to outperform the market in 2017-18, top fund managers say.

Sydney-based Selector High Conviction Equity Fund took the crown for the best performing Australian long-only share fund out of the 95 measured by Mercer.

Selector returned 33.8 per cent over the year versus the median return of 15 per cent. Selector’s biggest positions were in Aristocrat, Reliance Worldwide, Altium, Reece and Seek.

Mark East’s Bennelong Concentrated Equities Fund ranked second with a 33 per cent return, and is the best-performing, long-only strategy over three years and five years. 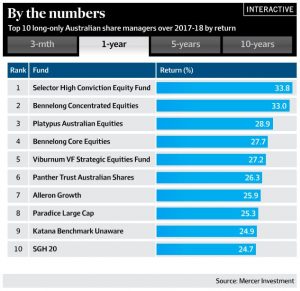 Mr East declined to be beholden to growth or value styles, preferring a quality-heavy approach that has seen him take positions in CSL, Flight Centre and Reliance.

“Companies we invest in have to have an earnings track record,” he said, delivering significant alpha in spite of not owning some of the high-octane technology names.

As for CSL, “it’s hard to argue that it’s cheap, but we think the earnings outlook justifies the valuation.”

The Platypus Australian Equities strategy rounded out the top three, returning 28.9 per cent over the year. 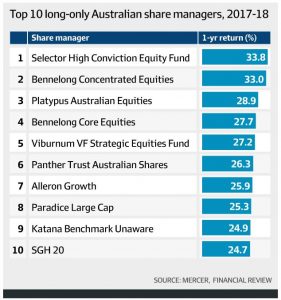 “The portfolio over the twelve months was positioned more towards resources and underweight banks and that helped,” said Jelena Stevanovic, who co-manages the Platypus Australian Equities Fund along with Prasad Patkar.

“Fundamentally we are a bottom-up shop. So the earnings growth profile of energy and resource sector companies just looked overwhelmingly better than the banks. Even if you look at the numbers now for fiscal year 2018 and, although it’s still early, for fiscal 2019, most of the earnings growth across the market is supported by those two sectors.”

Troy Angus, manager of Paradice’s large caps strategy, attributed part of the fund’s performance to well-timed entries into resources anticipating the cyclical upturn in the global economy back in 2016 which has supported strong commodity prices into 2018. 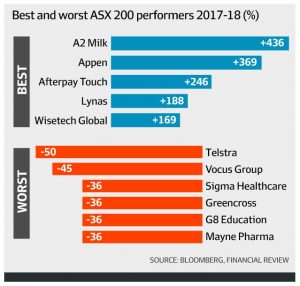 “That led us to invest in commodity stocks BHP, Rio Tinto and South 32, but also some of the industrial-type names, the likes of Computershare and Macquarie Group.” Computershare is a way to capitalise on rising interest rates.

“We also became more optimistic on oil anticipating a supply crunch which eventuated in the middle of this year,” the Paradice fund manager said, leading him to buy Santos, Origin Energy and Beach Petroleum.

Mr Angus’ strategy invests in around 30 stocks, and he feels the current pace of growth is still supportive of equity market performance.

“Ultimately we think this cycle will end, like all other cycles before it, with higher interest rates.”

While contrarian bets paid off two years ago, he’s not willing to go counter-consensus “just yet”. “What we do know is that the growth names where the multiples have rerated despite earnings expectations not changing, at some point, that stops.”

Romano Sala Tenna at Katana Asset Management said that actively moving in and out of the banking sector over the year helped the Katana benchmark unaware strategy to a 24.9 per cent return, ranked ninth.

“We went to a zero-weight over the year and then at the height of the royal commission hysteria we started to rebuild, eventually moving up to around 15 per cent of the portfolio which is quite sizeable for us,” he said.

‘We are holding our nerve’

Miners and energy stocks were also an important part of fund performance over the year, he said, holding Mineral Resources, BHP and South32.

Katana was also aggressive in the oil space during the year, he said, building positions in Santos and Woodside, but has since reduced its exposure. It also invested in Karoon Gas, which Mr Sala Tenna admitted “hasn’t performed but we are holding our nerve”.

He also owns CSL, A2 Milk and also held Synlait Milk over the year.

In the long-short universe, the Regal Australian Long Short Equity Fund took the top place, with a 29.2 per cent return over the year, followed by Antares High Growth Shares on 19.9 per cent, and Invesco Australian Equity Long Short on 18.3 per cent.

In the socially responsible investment category, Alphinity Socially Responsible Shares took out the top spot with a 21.9 per cent return.

It was a champagne year for some stocks in the Australian market, after A2 Milk climbed more than 400 per cent, Appen 350 per cent, Afterpay Touch soared 246 per cent and Lynas climbed almost 200 per cent, according to Bloomberg.

Telcos were a major detractor. Telstra dived 50 per cent in the year and Vocus slumped 45 per cent. Elsewhere, Harvey Norman fell 35 per cent and AMP dived 32 per cent.