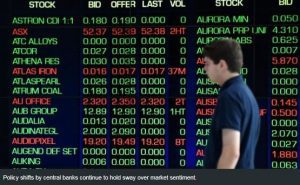 Investors flooded into shares on Tuesday, buoyed by new record highs on Wall Street and a broad-based lift in commodity prices.

The promise of an impending US tax reform plan has sparked a global risk-on sentiment which has kicked off the Santa rally on the ASX.

Both iron ore and oil enjoyed buying support, meaning materials and energy were among the best performing sectors and the positive mood spilled over into the big four banks. 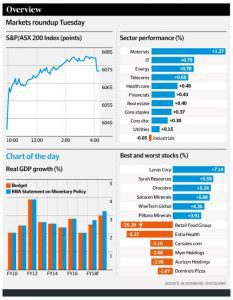 “We could probably call the beginning of the Santa rally, but really the tax push in the US and a bump in metals and mining has given the ASX wings today,” said Romano Sala Tenna, portfolio manager at Katana Asset Management.

The Nasdaq hit another record this week, breaking through 7,000 points which has given fund managers cause to pause.,

“But given we are seeing both economies incrementally improving, we can handle an over-valued equities market in the US. Though there might be some consolidation in US markets early next year in which case that might give the Aussie market a chance to catch up.” In other equities news, Carsales.com shares dropped 3.1 per cent to $14.68 following a downgrade by UBS to a ‘sell’ rating, citing valuation concerns.

Japara Healthcare also tumbled 5.7 per cent to $2 after the company downgraded its profit guidance. FY 2018 EBITDA is now expected to be 5 per cent to 10 per cent lower year-on-year as a result of lower occupancy levels.

Retail Food Group is still sliding; falling another whopping 25 per cent to $1.98 on Tuesday after the company advised of a fall in its FY 2018 first-half statutory net profit after tax.

Elsewhere, Helloworld Travel’s shares enjoyed a 3.3 per cent lift to $4.95 after it announced plans to acquire Magellan Travel for $32 million.

Sirtex Medical shares slipped 0.4 per cent to $15.95 after the liver cancer treatment specialist acknowledged that legal proceedings against it had been filed in the Federal Court by lawyers Maurice Blackburn. The claim for breaches of its continuous disclosure obligations is being funded by litigation funders IMF Bentham who will meet the legal fees of Maurice Blackburn and wear the risk that the claim is unsuccessful. IMF Bentham claims that it has a 91 per cent success rate in claims funded to June 30 2017, with 147 out of 162 cases completed won. The Litigation funding provider’s shares rose 4.1 per cent to $2.81, its highest level since April 2000.

The World Bank on Tuesday raised its forecast for China’s economic growth in 2017 to 6.8 per cent from 6.7 per cent it projected in October, as personal consumption and foreign trade supported growth. But the Washington-based lender kept its forecast for China’s 2018 and 2019 GDP growth unchanged at 6.4 per cent and 6.3 per cent, respectively, due to less accommodative monetary policy and the government’s effort to rein in credit and control leverage. The key downside risks to the forecast are the still rising leverage of the non-financial sector and uncertainty around housing prices.

The price of gold managed to stay firm throughout Tuesday after lifting overnight as uncertainty over US tax legislation weighed on the US dollar. The precious metal was fetching $US1263.23 an ounce on Tuesday afternoon. The US dollar index fell, making bullion denominated in the greenback cheaper for buyers using other currencies, as concerns grew over whether the proposed US tax code overhaul would have a major impact on economic growth. “If (the tax bill) were to pass, we think the gold price would fall lower,” said Rob Haworth, senior investment strategist for US Bank Wealth Management. “That has to do with stronger growth, more room for the Fed to normalise interest rates. That should create a headwind for investors.”

Iron ore is still enjoying its rise as an environmental cleanup in China tightens the supply of higher-grade material that’s less polluting and allows steelmakers to maximise production. Futures on the Dalian Commodity Exchange surged 5.5 per cent, the most in a month and the benchmark price for spot ore with 62 per cent content delivered to Qingdao increased 3.7 per cent to $US74.15 a dry tonne, the highest since September, according to Metal Bulletin. The commodity has rebounded since the start of November. While China’s bid to curb pollution by cutting steel supply this winter is hurting overall consumption of ore, it’s supporting demand for higher-quality material because the variety is more efficient to use.

Oil traded near $US57 a barrel before US data forecast to show crude stockpiles in the world’s biggest consumer fell for a fifth week. Inventories probably lost 3 million barrels last week, according to a Bloomberg survey before Energy Information Administration data Wednesday. Nigerian oil workers suspended strike action and agreed to continue talks next month, a union spokesman said, while output from a Libyan field returned to normal after a power outage Saturday, said a person familiar with the matter. Oil has rallied the past three months as the Organisation of Petroleum Exporting Countries and its allies reduce supply to drain a global glut. The unprecedented cooperation among producers has pushed prices this year to average almost $US51 a barrel, on their way to a second annual advance.