With the attention continuing to focus on the day to day machinations of ROPEC (Russia-OPEC), there has been a lack of awareness as to some of the structural changes that are taking place in the underlying supply fundamentals.

Front and centre, has been that exploration budgets have been slashed. From The US$100bn level in 2014, Wood Mackenzie estimates that the amount spent on oil exploration dropped 60% to approximately US$40bn in 2016. This resulted in the number of wells being drilled reducing by nearly two thirds from more than 1200 in 2014 to just over 400 in 2016. 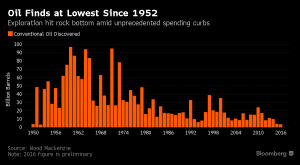 These reduced budgets have been further compounded by the increasing complexity and difficulty associated with locating commercial oil reservoirs. Combined this has resulted in the discovery of a mere 3.7 billion barrels in 2016 – the lowest level since 1952. To put that in perspective, for the whole of 2016 approximately 40 days of current usage was replaced.

And what needs to be recognised, is that non-ROPEC producers are critically short on reserves and are extensively reliant on new discoveries to replace existing production. This further concentrates future capacity in the hands of the oil cartel.

In the world of investing, the ideal outcome is to get the ‘short game’ right. But in reality this is not possible for a whole variety of factors –some of which are unknowable at the time of investing. In these situations, it is hence advantageous to have in place a ‘back stop’ or safety net. In the oil sector, the tightening supply fundamentals provide such a back stop over the longer term, irrespective of the short term moves.