Explainer: Why Lithium Is Such A Hot Item Right Now

Dozens of struggling miners have moved to reinvent themselves as lithium companies while investors are pouring money into such endeavours.

But what is lithium and why does everyone want it?

What is it used for?

Traditionally it has been used in aircraft manufacture and to treat people with bipolar disorder, because it helps stabilise mood swings caused by the illness.

Until recently, demand has been low, with only five mines developed globally in the past two decades.

What everyone wants it for now is batteries — not least of all the South Australian Government, Tesla and Neoen, who have announced plans for the world’s largest lithium ion battery in a bid to secure the state’s power supplies.

The lithium ion battery has actually been around for decades, but the worldwide shift towards smart phones, electric bicycles, cars and household solar storage is driving up demand. 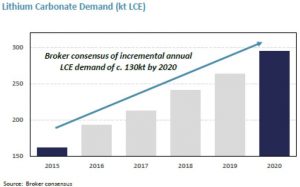 “Its ability to [make] long-lasting re-chargeable batteries is probably where its niche market is at the moment,” University of Western Australia research associate Tristan Clemons said.

“The advent of portable electronics has really brought it on. If you think about society now and the amount of battery use we have, it’s gone up exponentially.

“They all have rechargeable batteries which are mainly made with lithium.

“If we think about the house and trying to charge using solar panels, you need to have good battery capabilities to be able to store that power when the sun is not shining. So that’s the real application for lithium going forward.”

What other materials are likely to boom?

Other conductive metals suitable for battery storage are also on the rise.

There is more than 10 times the amount of graphite than lithium in a lithium-ion battery, which is why miners are also scrambling to get their hands on graphite deposits.

But analysts said the craze over commodities feeding the electric battery market had moved past lithium and graphite.

“It started a couple of years ago with lithium, then graphene was the hot commodity, this year it’s turned to cobalt,” Katana Asset Management analyst Romano Sala Tenna said.

“What we’re seeing now is the first generation of electric batteries.

“Even though it’s quite a deep market with kind a substantial supply base already, over time I think demand for electric batteries and the like will start to outstrip supply.”

So should I put all my money into renewables?

Mr Sala Tenna issued an investor warning about the large number of companies dabbling in the sector.

“The vast majority won’t go anywhere for two reasons. One is they don’t have an economic deposit in their own right, and secondly they’ll be overtaken by the early movers,” he said.