Growth stock such as Wisetech, Altium, and Afterpay have seen sensational gains this week, underscoring the power of backing the right growth names. However this strategy has been working for a few years now, and it is harder for investors to come across new ideas today. While tech and healthcare themes have been good for growth investors, in this episode we sift through the industrial, financial, and retail sectors to look for any growth stocks that have slipped off the radar. So tune in, or read the transcript, as Ben Clark from TMS Capital asks Romano Sala Tenna from Katana Asset Management and Michael Wayne from Medallion Financial for their views on five undiscovered growth stocks. 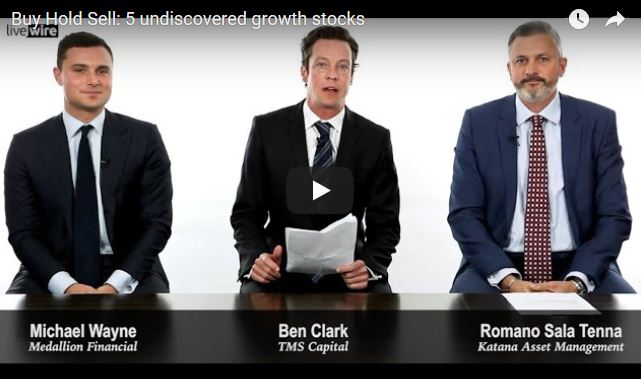 Romano: It’s a sell for us. It’s been a great performer and I think consensus forecast is still for about 20% growth per annum. But this is discretionary retail, which is highly cyclical. We’re struggling to see barriers to entry and in the last couple of months it has formed a technical top, so we could see a sizeable correction from here. Possibly wrong in the short-term, but for us it’s a sell.

Michael: It doesn’t look expensive. The business momentum is definitely there, but it’s a style of business that we’re not too keen about, so it’s a sell for us. We’ve had the CEO recently step down and, a year ago, we had the CFO step down. It’s never a good look when you have high management changing positions, particularly now that they’re expanding into the US as well. So, although it’s had a very good run in a very challenging space, for us it’s a sell.

Michael: This is a buy for us, Speedcast, one of our preferred positions. The telcos have been the worst performing sector, I think, for the last two, three years now. But this is a new age modern telco involved in satellite telecommunication. Industries that operate in remote locations still need access to data and the Internet. If you think about offshore oil drilling, shipping or cruising industries, they’re some of the industries that really are benefiting from supporting Speedcast. They won a lot of contracts in recent years and the cash flows are starting to come through for those so it’s a buy again for us.

Romano: It’s a hold, only just, mind you. It’s got a stretched balance sheet. Interest cover is pretty ordinary. We’re struggling to see barriers to entry. They’ve also made two large acquisitions, which they bedded down last year, but that’s left a bit more risk in the mix. On the flip side, they have got good cash flow. Valuation’s quite reasonable. They have got pole position. So it’s a hold, just, and a bit of a watch and brief.

Romano: It’s a strong buy for us. The Royal Commission hoo-ha really has brought into question the whole importance of mortgage broking. We believe unequivocally that that is a structurally significant sector in terms of the importance of having an efficient home market. AFG is the largest aggregator. It’s an important company to Australia. It’s on 10x earnings, 7% fully franked yield, we model good growth from securitisation. The commercial lines and also white labels, irrespective of credit growth, have some of those independent drivers themselves, so a buy for us.

Michael: AFG’s a sell for us despite the Royal Commission being mostly priced in, it’s hard to think something positive is going to come out of that. There’s going to be certainly some negative effect on the industry. Looking at the industry as a whole, as you say, credit growth is constrained. Lending standards have been increased and tightened as well, so for mortgage brokers, it’s taking longer to get an application over the line, and also the volume growth just isn’t what it was a couple years ago. So, given the recent rally in the share price, it has had some strength too. We’ll be selling into that.

Michael: Bapcor. I’m not sure it’s undiscovered but potentially underappreciated. The automotive aftermarket parts business. 75% of their business is in aftermarket parts. A lot of people think that Bapcor’s a retailer because of Autobarn and Bapcor stores, but that’s just simply not the case. They trade on about 30x earnings. Once you factor in this year’s growth, it comes down to about 20x earnings, on the one-year forward P/E. Trades on a P/E-growth of below one, so I think this is an underappreciated growth story. We just had a very good track record of growing through acquisition and growing organically as well. Buy.

Romano: We like Pioneer Credit. Just a brief history lesson. Go back to Credit Corp, it listed in September 2000 at 50 cents a share. It’s trading at $23 today, and it has paid out $4 in dividends along the journey, so about 800%. We know that industry is very profitable if run well. Pioneer Credit’s doing absolutely everything to emulate what Credit Corp did. They listed in 2014 with an EPS of eight cents a share. It’s 26 or 27 cents this year. Huge growth. We’ve been mapping out growth for the next five years in this company, so for us, it’s a buy.